And this is what it looks like in real life: 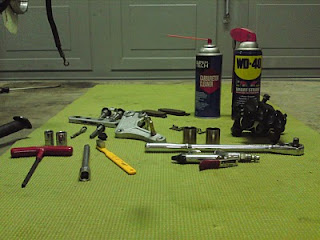 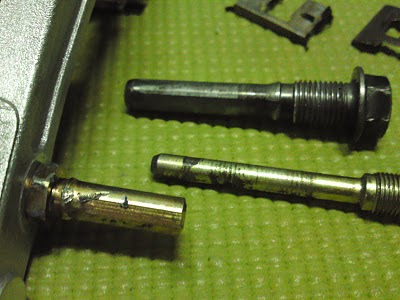 I don't know how one can manage to trash sliders like this but I can imagine it leading to a sticky brake in the future as it shreds the boots. All of them seemed too tight or dirty, this was a good project I think I'll be able to make some solid improvements here. 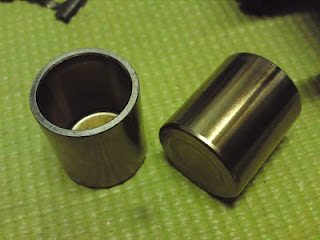 These were tricky to get out, I had to use a rubber tipped air gun in the fluid inlet to blow them out, the trick is getting them to come out at the same time so that when the first one pops out the second is almost out so you can work it the last bit. Really you could just take one out at a time and clean them individually... but then I wouldn't have been able to get this nice picture. It was all really a bit unnecessary by the end of it because by the time I got them out I had drenched the whole caliper in WD40 and rubbed all over them pretty thoroughly so when they came out they were already clean.

Ready to go back in: 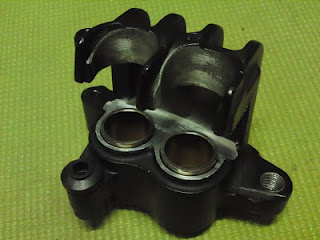 Some of the parts will get a little clean up and be ready for re assembly. Such as: 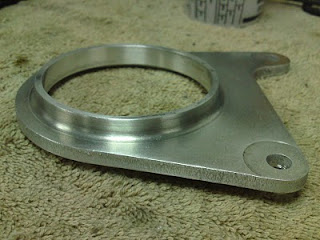 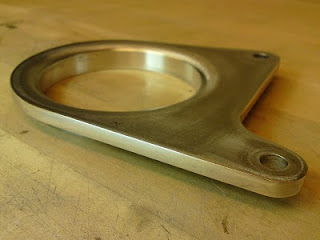 Better
Posted by Kit at 6:50 AM No comments: 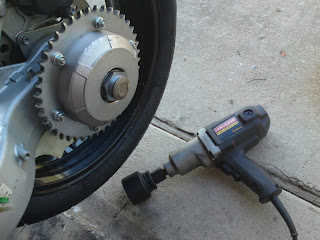 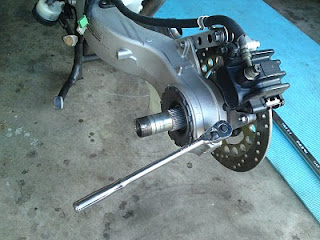 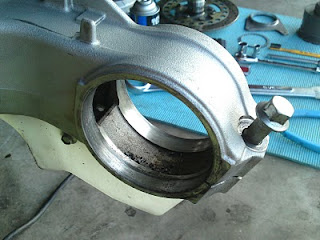 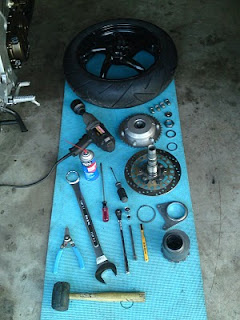 Everything you need to pull apart your spindle (really you don't need the box wrench, but I paid $40 for it so I was determined to use it)
Posted by Kit at 6:16 AM No comments:

So fresh and so clean clean

It took me a while to clean off all the surfaces. The insides of the valve covers were the worst, they were taped off as there is a grooved surface that I didn't want to sand out. The powder built up on the tape and created a flange that had to be removed. 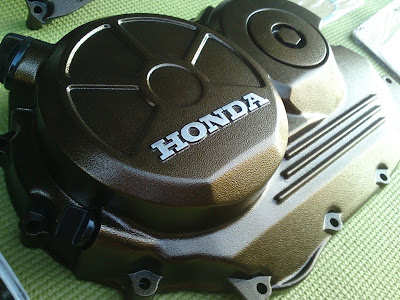 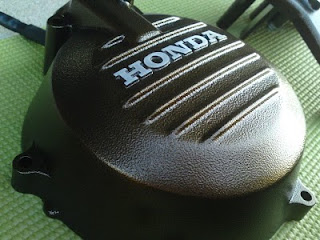 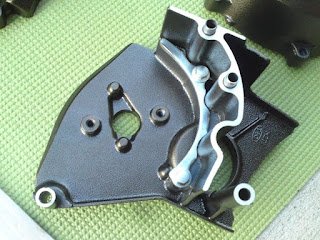 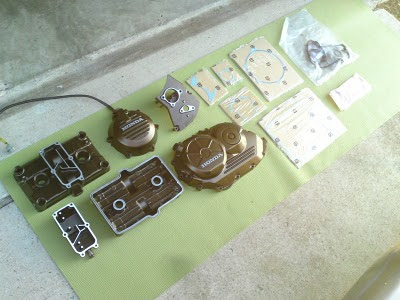 New gaskets and all, this all came with some good sticker shock, these new fangled motorcycles are expensive!
Posted by Kit at 1:18 PM No comments:

Just had a look at the sample part that he did for me. It's not exactly as I was expecting, but I think it will be really cool so I told him to go ahead with the rest of the parts. I was originally thinking of going with a brighter gold, but most of the real RC30s have these parts in black or at least a very dark bronze, so this is a little more true to form. Also some of them are a little beat up still and the texture will "smooth" them out nicely.

It's dark bronze BTW, it might look black in the pic.

Dropped my parts off for powder today and looked at some of the colors he had available. We're going to do one in a dark bronze and see if I like it and go from there.

After the initial sandblast, they still were pretty scratched up:

Had to grind them down a bit

Oh, I also had one pin (or whatever you call these things) that gave me a whole mess of trouble. I eventually had to take a drill to it and rip it out, scored the sidewall a little, but it should be fine.

35 thousandths, that's how much my rear brake disk it out, damned stunters!

I don't know yet what's bent in there, but something's very wrong. Do I feel a single nut conversion coming on :)

Definitely need a new one of these
Posted by Kit at 1:08 PM No comments:

Too hot to work outside

Most of this thread has covered the last few months of work (from whatever the date on that CL ad is to now). What follows in this post was mostly yesterday or the day before.

I've got a friend that owns a sign shop who just started doing powder, so I'm going to get all this stuff ready for him and drop it off at his shop. If I don't rush him and don't abuse the deal sometimes he'll do my stuff for free.

I'm planning on having all that done in magnesium-ish gold. Not orignial I know, but I like it and that's what counts.
Posted by Kit at 1:01 PM No comments:

With the help of a friend of mine we managed to get her running, not very well, but that was without the plenum or the stacks on the carbs (which have black rubbery tar in them) and it was without an exhaust. So I'm feeling a little bit better about my mystery purchase, not that I felt bad, but it was nice to hear her wake up.

...and now that I know she works, back to tearing her up:

Had a little more water in her than I thought... this is what happens when an airhead tries his hand for the first time at a waterbike. There are 5 other bikes in my garage and this never would happen to any of them!

Ebay'd a new tank, and it's my favorite color

it's from a 3rd gen so the rear mount needs to be modified a bit for it to fit. I haven't figured out the best way to do this yet. I might just end up filling in the old hole and making a new one
Posted by Kit at 12:35 PM No comments:

I tried to make them as simple as possible and use just 2 M6s to clamp them, but the off center tension on the bars does not work. Also my 7/8" trough ended up undersized so they don't really fit. They work great for now for pushing the bike around the garage, but when I get closer to riding it I'll have to knock out a stronger set.
Posted by Kit at 12:32 PM No comments:

Made myself a practice rearset:

It wasn't intended to be a practice piece, but it doesn't really fit, so there you go. This one was broken off the bike when I got it. I think the next one I do will have a more stock style peg mount... that will require a much fatter piece of stock though.
Posted by Kit at 12:30 PM No comments: