With a friend over to help me with the 750 we realized that the whole front end of this bike is tweaked to the left. Must've been in a front impact, the forks seemed to travel ok, but there was no denying that they're bent. So... I do have these laying around: 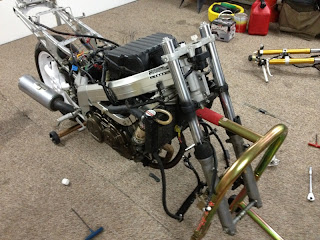 It's time to put them to good use. From one 750 Honda to another. Since Ill be swapping the VFR to an R6 front I think I'll probably end up having to use an R6 wheel too (one of the reasons that project's still held up) So Squid will be borrowing the VFR front roller.

Everything actually fit except the VFR stem was too long for the CB750 neck so I had to grind the weld off:

and then have both stems pressed out and the CB750 stem pressed into the VFR tree by Plano Machine for 15 bucks (I actually had the VFR stem loose in hand from the other swap at this point) Then I got a friend of mine to run a bead along the bottom for a little extra reassurance, but more on that in the next post.

Stem done and new tapered bearings from Cycle Concepts in Frisco ($20). Once all the parts were swapped it was just a matter of bolting it all together.

So I may not have a rear brake for a while, but man oh man should that front stop good.
Posted by Kit at 6:17 AM